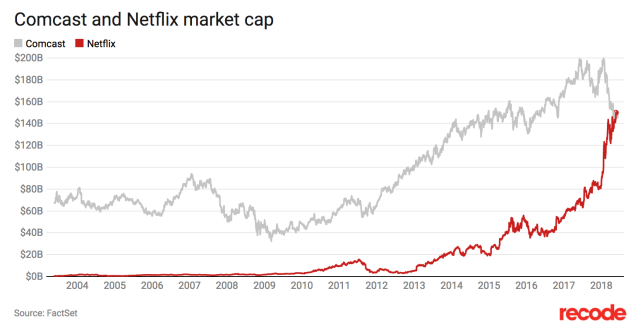 Netflix’s market value increased to about $150 billion today; it is now worth more than Comcast.

Comcast, the largest U.S. cable company, has been losing video subscribers as people cut the cord and move to streaming services … such as Netflix. Comcast had 22.3 million pay TV subscribers in the first quarter of 2018, down from 22.6 million a year earlier.

Of course, Comcast and Netflix have completely different businesses. Comcast owns a sizable broadband company in addition to cable. It also owns NBC and Dreamworks. It’s also planning on bidding on Fox’s movie and TV studios, cable networks and even a stake in Netflix competitor Hulu.

And most of Netflix’s growth is coming from its international expansion.

But the symbolism is hard to resist.